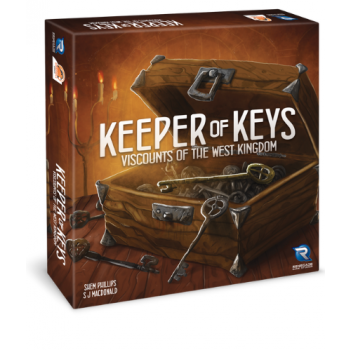 Viscounts of the West Kingdom Keeper of Keys

In Viscounts of the West Kingdom: Keeper of Keys, tensions continue to rise in the King’s court. Some choose to plot in secret, forging alliances with like-minded officials. Others seek out treasures and secrets hidden deep within the castle walls. Will you remain loyal to the very end, or take your future into your own hands?

Thick player boards with slots for housing the new Chest Tiles, which add anew element to the tableau management for players to explore

Three public Buildings for players to compete over constructing, each withtheir own unique in-game abilities and bonus rewards

Mechanisms for players to gain more Hero Townsfolk into their deck, providing even more power turns and possible combos

This is a preview of the recently viewed products by the user.
Once the user has seen at least one product this snippet will be visible.